Update on the Mastery Transcript 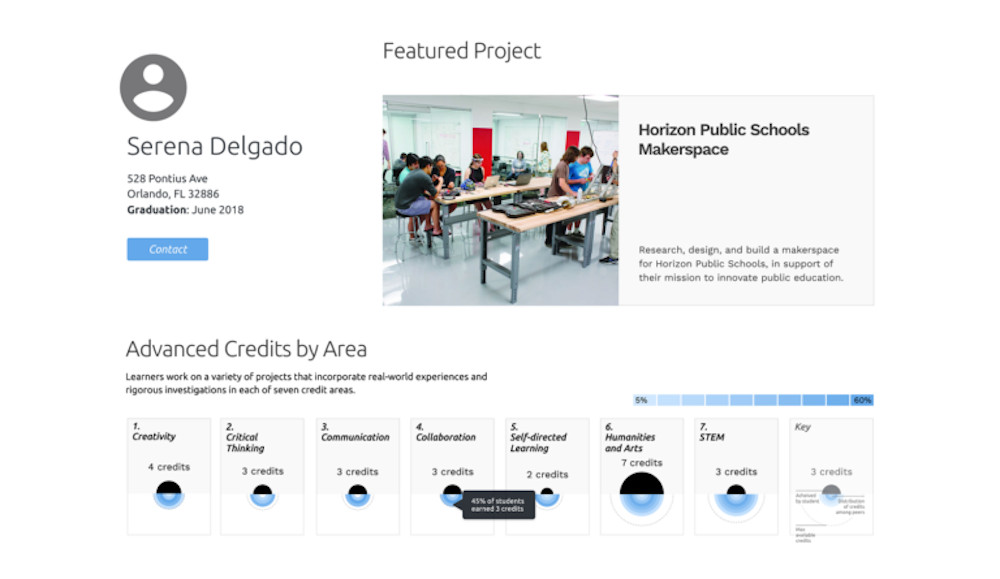 We have a lot of exciting information to share about our work with our member schools and design team to create the first functional prototypes of the Mastery Transcript Platform. Following is an overview of the key phases of our project.

A new high school transcript has potential to support change in many areas of secondary education. Our priority at MTC, from the beginning, has been to to improve the student experience. As we design and build the Mastery Transcript, therefore, students are at the center of our work.

One of MTC’s central design challenges is how to clearly and succinctly visualize a student’s skills and abilities without relying on the mainstays of traditional transcripts: courses, credits, and grades. In place of those, we’ve developed a model we’re calling “Mastery Credit Architecture”: a system that displays credits when a learner has mastered a skill, content knowledge, or habit of mind, but doesn’t include information about attempts, partial progress, or credits they tried to earn, but didn’t. It’s a model that encourages students to take risks, but doesn’t penalize them for aiming high or even failing. Some credits are Foundational—they correspond to a school’s graduation requirements—and others are Advanced—they highlight those areas in which students have chosen to invest their extra time and energy. In turn, all of the Credits are defined and certified by the school—we don’t have a prescribed model or a mandated set of Mastery Credits. In the early stages of our design process, we built straw models of Mastery Credits for a fictional school we called Mastery Academy, and then worked to test our model further by asking a select group of member schools to draft their own complete sets of Mastery Credits.

To help us draft these full sets of Mastery Credits, and also to help us generate a number of sample transcripts that we can use to validate our model with Higher Education stakeholders, we identified a group of 17 schools who agreed to dedicate extra time to reviewing and developing our concept models in late 2018 and early 2019. These schools were selected to be part of our Prototype Working Group (PWG), in part because they represent as diverse a selection of members as we could find—public and private schools around the U.S. (and even China!). In addition, we chose them because they are all actively implementing Mastery Learning principles in their schools, meaning they were ideally positioned to jump in and help us with three key tasks: 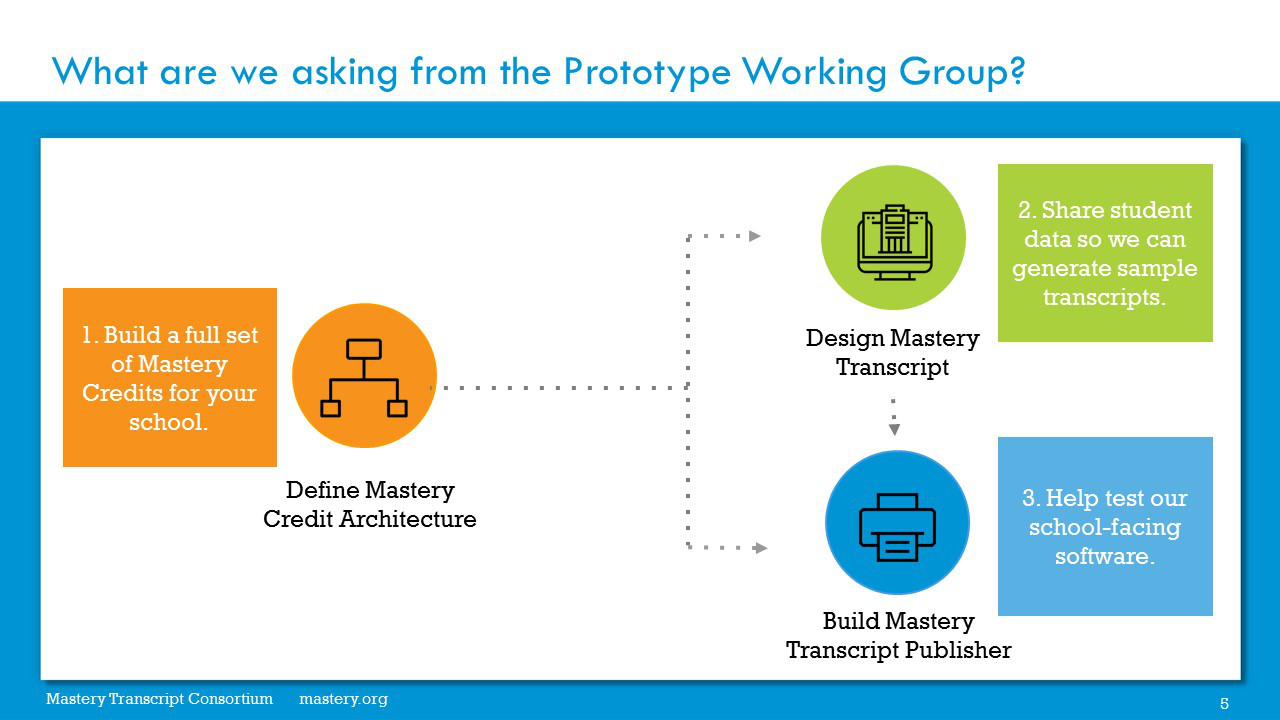 If you are a member school and attended early Site Directors’ Meetings in 2017-2018, you may have seen early grayscale “wireframe” drawings that we used to explore possible layouts for the Mastery Transcript. These early paper prototypes helped us to understand what types of visualizations did/didn’t work with various user groups, and to identify which designs were flexible enough to support different schools’ Mastery Credit Architectures. Based on user feedback from these paper models, we then built a rough simulation of how the software-based Transcript Reader would look and feel, then took that clickable demo to a rapid succession of large group meetings through the Fall of 2018, both with member schools, and with attendees at various education conferences. During these group sessions, key themes emerged that now inform all of our designs, including giving each student some choice as to what is featured in some sections of the transcript by giving them space to highlight featured credits or featured evidence, and creating multiple views of the transcript that are optimized for different readers in different roles. 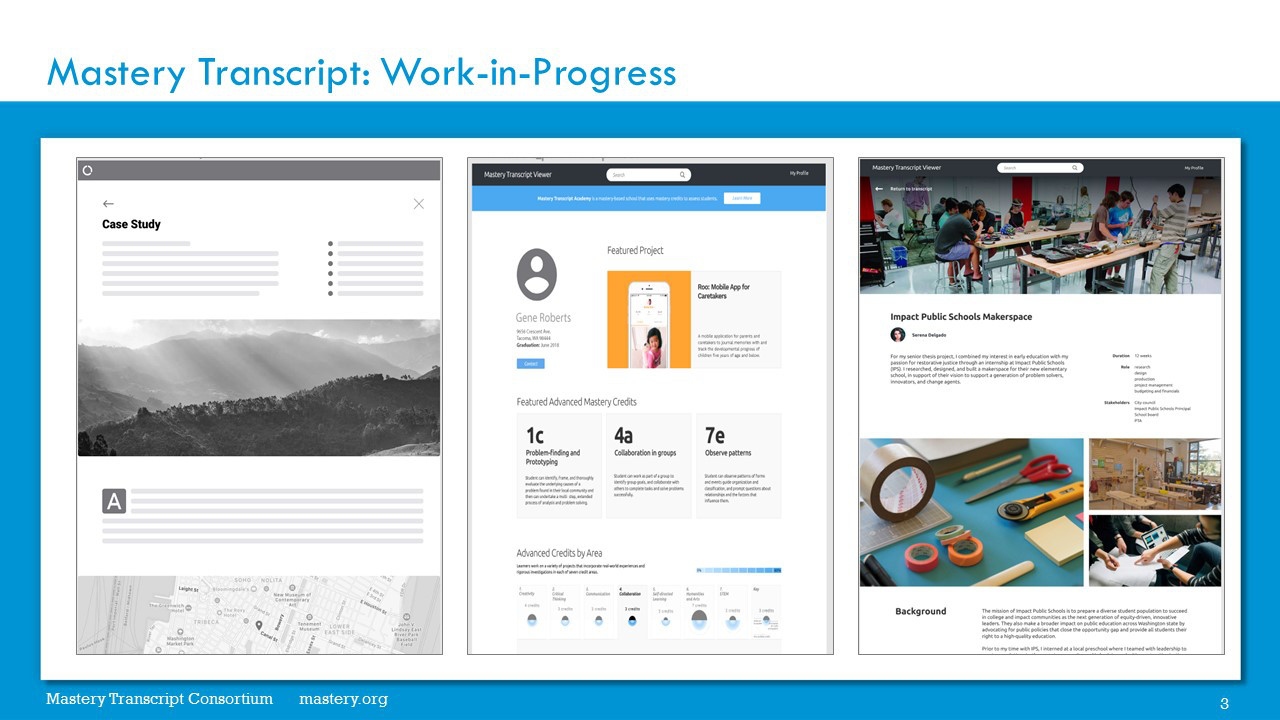 Build a Functional Prototype of the Front-End Transcript Reader

With each successive cycle of feedback and improvement on our clickable demo, we were getting closer to a viable model for the layout and functionality of our reader-facing transcript. In fact, we knew we’d reached the limits of that demo when we stopped getting feedback about the navigation and functionality of the system, and started to get more feedback and questions about the academic choices made by “Serena Delgado”—the fictional student who populated our demo. It was clear that to get the next level of meaningful input, especially from our partners in Higher Education Admissions, we’d need a version of the transcript reader that was “real” in two senses of the word. First, this version would be “real code”—no longer a demo with a few clickable “hot spots,” but an actual piece of browser-based software with complete functionality and navigation. In addition, it would display “real transcripts”: actual school records, rather than mock-ups. To make this happen, we’ve secured actual student records and work samples from two student volunteers attending PWG schools: having these real students’ transcripts will allow our next round of testers to respond to what they’re seeing in more detail. We’re finishing this first “functional prototype” of the Transcript Reader as we speak, and plan to roll it out for feedback in early 2019.

Having a functional front end with high-fidelity sample student transcripts is a good start, but if we’re going to build confidence in our new approach, we need to demonstrate that it works with a wide variety of schools and students, and that the transcripts we generate are more effective than the traditional models we’re replacing. To do this at scale, we’re designing the first version of the school-facing software that member schools will use to store and manage their lists of Mastery Credits, and to track and update their students’ progress. We’ll have a functional prototype of this “Credit and Evidence Management Tool” completed in early 2019, and will then connect it to the front end “Reader,” so that all of our PWG schools will have the ability to import student data and generate large numbers of sample transcripts. 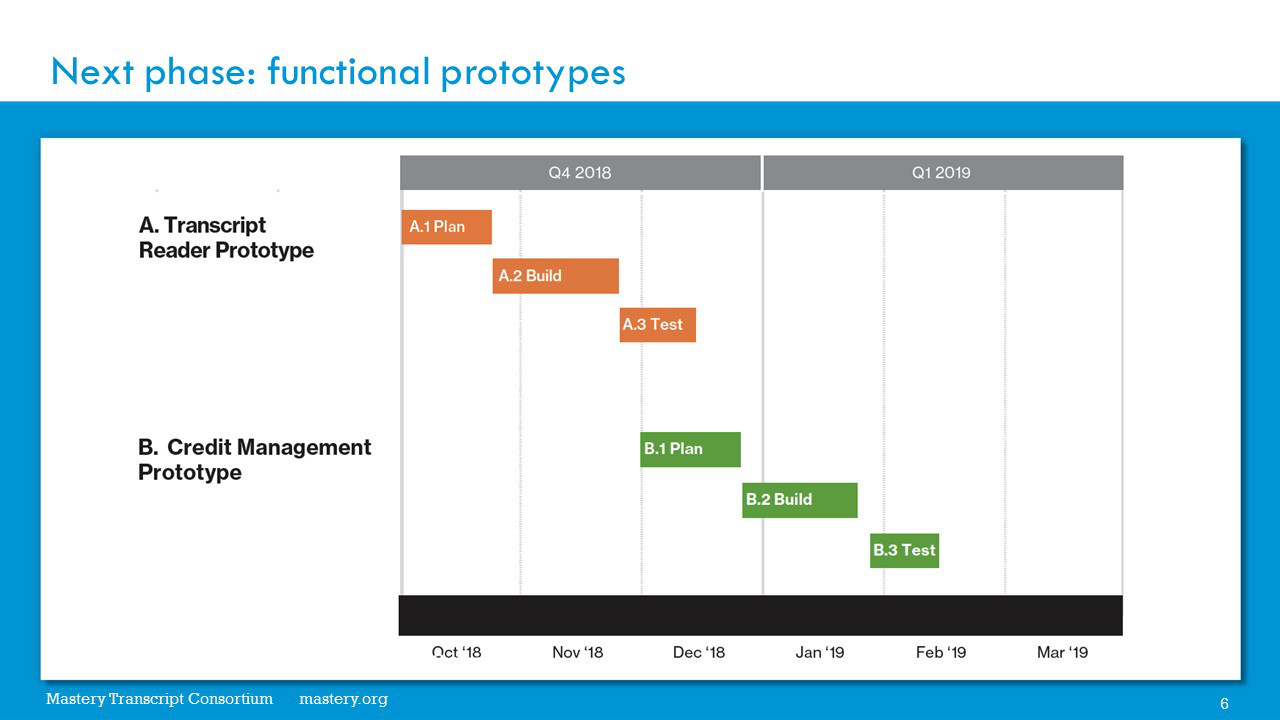 Mike Flanagan is the CEO of Mastery Transcript Consortium (MTC), leading the strategy and development for both the Mastery Transcript and for services for member schools. He is an experienced education technology executive, a father of teenagers, and on weekends he coaches CrossFit near his home in Winchester, MA.