Progressing to Mastery: A Different Kind of Flex

The 2020-2021 academic year has been extraordinary to say the least. Yet and still, the pandemic has shone light on the inadequacies in traditional learning models and attitudes toward measuring academic progress. While we have long extolled the benefits of the Mastery Learning Model of teaching, we are now seeing it recognized, and even celebrated, more widely in the mainstream, especially as more and more students are graduating from mastery learning programs at a time when we are reconceptualizing “achievement”. On May 19, we heard from the learners below on their experiences during this extraordinary year. The hour-long “talkback” kicked off a series of such conversations where we hear from our stakeholders in earnest.

Featured high school students were all enrolled in mastery learning programs and had used the Mastery Transcript to further their educational journeys via internship and college admissions. Here’s a peek into their worlds from our first Learner Talkback.  We were bowled over by their confidence in the next phase of their academic careers.

Sophia loves children and learning, so much so that she plans to attend New York University in the Fall where she will pursue Early Childhood and Special Education, an institution known for its selectivity. Sophia was surprised to get in to her first choice school, but along with being overjoyed, she’s also confident that it is her Mastery Transcript’s ability to showcase who she is as a person and the unique qualities that she brings to the university that really sets her apartfrom the thousands of other highly qualified applicants.

Tatiana (Tati), is an ambitious 18-year-old who is entering her fourth and final year at Springhouse Community School. She currently serves as a Student Board Representative on the school’s Board of Trustees and is also a Student Representative on the Curriculum Committee. Deeply passionate about social justice, revitalizing education and pedagogical design, she’s still exploring her options for the future, but sees a strong possibility of a career in education.

Abhinav (Abhi) has been attending Khan Academy since sixth grade. It is his dream to make the world a better place through his love of technology, a path that he will start this Fall when he enters college to pursue his Computer Science degree. Abhi’s Mastery Learning journey has afforded him such valuable experiences as being a teaching assistant at Khan, heading the robotics team, and working on a research project about Alzheimers alongside one of his teachers.

What do you like most about mastery learning and the Mastery Transcript?

“Mastery Learning gave me so much freedom to create my own path in learning. Up until high school, I was very focused on how to get an A. Going to Pathways, I didn’t have to worry about grades, I only had to focus on how to prove to someone that I had learned something and that I had grown from the work I had done. That was empowering because it didn’t necessarily mean studying, it could be going out into the community and performing a service project. That gave me so much more energy and confidence and passion about what I was doing.”

“I like that Mastery Transcript measures progress through skills and competencies. I think grades are terrible and a limiting representation of young people. Mastery Transcript is dynamic and humanizing. It captures so many more dimensions of a student than grades.”

“It gave me a floor to build off of instead of a ceiling to hold me down and limit my growth. Having the letter grades taken away let me focus more on exploring my passions. Being encouraged to learn new things and new skills is something I’ll take with me into college, my career and personal life. It’s a gift to know that you can learn anything and Mastery Learning has taught me that.”

How have you used the Mastery Transcript?

“I was one of the first students from Pathways to apply to college, essentially pioneering and proving the Mastery Transcript process…found it empowering. Mastery Transcript made it easy to interconnect my experiences. I was able to include things like a paper I wrote for a bioethics class on a bioethical dilemma that was personally important to me as well as connect my work in the Black Lives Matter movement, which I spoke of in my essay. Mastery Transcript allowed me to share what’s important to me — my hopes, dreams, passions and goals — not just that I got an A in a class or a high test score.”

“I used Mastery Transcript to secure a month-long fellowship in the Outer Coast Summer Seminar, a small and highly focused, academic and service-based wilderness program in Sitka, Alaska. I was a little nervous about the process at first since I hadn’t used the transcript much before this point, but it only took a couple days to compile my experiences and evidence using Mastery Transcript.”

“I used Mastery Transcript as part of my college application process. I tried to not have any expectations as I went through the process because I honestly thought it was a little risky not using the transcripts colleges were more accustomed to seeing. I was elated when I started receiving acceptance letters, though not necessarily surprised because Mastery Transcript wasn’t as limiting as I first thought it would be. It was actually the opposite. So many people told me how expansive it was.”

How do you feel mastery learning and the Mastery Transcript have benefited you?

“I really like having the ability to add evidence to support and give a better sense of who I am. I also liked that there was already a description of Springhouse in my transcript to give colleges and programs an idea of the environment that I’ve been immersed in. A traditional learning environment with grades would have been confining and not given me the freedom or autonomy to explore and learn the way that I have and a traditional transcript wouldn’t portray me accurately; it would force me to be confined to a system that just wouldn’t represent my true self.”

“Without Mastery Learning I would’ve been less engaged in my learning and I wouldn’t have had the opportunities and experiences I’ve come to value most. I’ve learned to express my creativity and to take my passion projects more seriously to better showcase my talents. Through independent work, internships and projects I’ve learned how to set reasonable goals and manage my workload, gaining valuable time management and organizational skills that I know will benefit me in college and when I enter the workforce.”

What’s your advice to other students?

“Believe in the system. I had considered switching to another school because I was worried I wouldn’t get into college, because admission officers wouldn’t understand a non-traditional transcription. But if you put in the work, it works. People appreciate authenticity and passion and Mastery Transcript does a great job of showcasing these things.”

“Take time to think about who you are and what your goals, passions, and values are. Make a list of the things that are meaningful to you that you’ve done, think about how they relate to what you want to do, and then expand upon them.”

Our Purpose Statement: The Mastery Transcript Consortium® (MTC) is a growing network of public and private schools who are introducing a digital high school transcript that opens up opportunity for each and every student — from all backgrounds, locations, and types of schools — to have their unique strengths, abilities, interests, and histories fostered, understood, and celebrated. 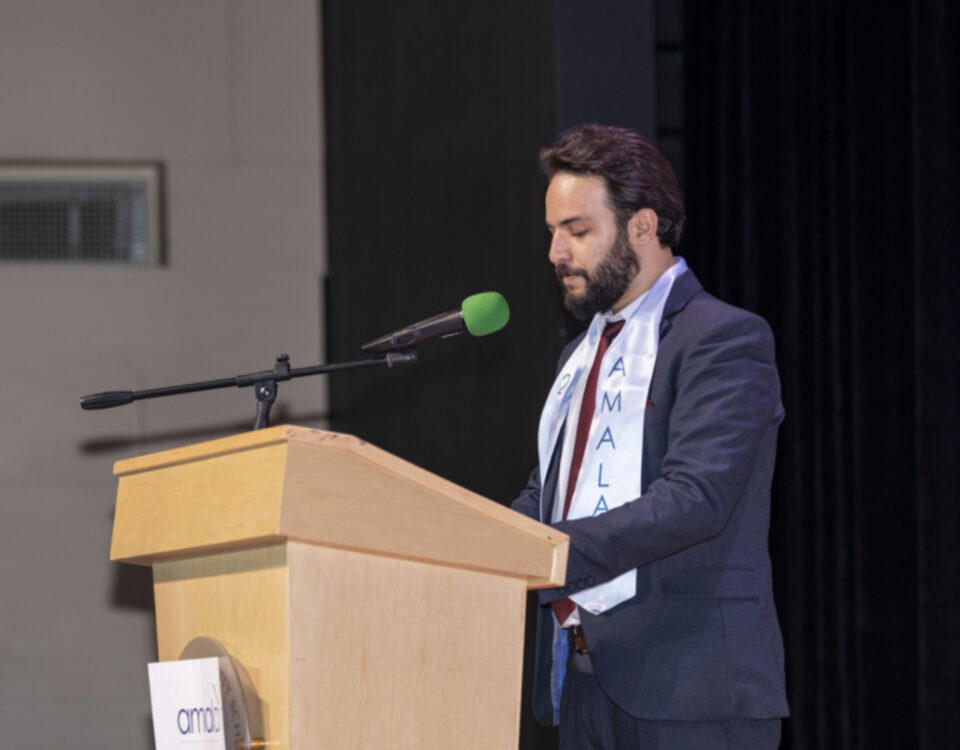